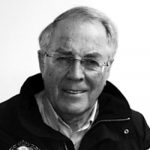 Steinar is an educated mechanical engineer from Sweden. He served in the Norwegian Air Force before starting a career in shipping and fishing developing vessels and companies in the marine industry. From 1977-1987 he built up the Northern Shrimp industry, and since 1987 has been a joint owner of fishing companies. He has developed projects in sectors from the cruise industry, the fishing industry, and offshore oil. Steinar was the Honorary Consul in Nova Scotia for Norway from 1989 to 2013, and he resides in Halifax.